Day 1, New Year's Eve, 2015
I had been itching for another EV road trip, to hell with the on board Lear 3.3 kW charger!  My schedule for the New Year's holiday gave me time to execute a trip I'd been planning for months:  Atlanta to Asheville or Maybe Gatlinburg.  Yay!

This trip was what might be called an exploratory endeavor, just to gather data and see how it goes.

Getting Started
Usually, I'll plug-in the car overnight at home the night prior to a road trip, but this time, I had only gone 2.9 miles since the last charging session, so I didn't bother to plug-in.

The above photos were taken in my driveway just before departure.  The time was just after 4pm; the reason for the late start time was simple:  EV road trips in short-range EVs like the Leaf, i3 and Spark EV face charging bottlenecks on paths that are intercity or that are interstate.  In this case, my Spark EV is hobbled by its 3.3 kW on board AC charger (it can effectively take on ~15 miles range per hour of charging @ 240V/13A; 5 miles range per hour of charging @ 120V/12A.  Good for overnight, or perhaps during a long food break).  The Spark EV's CCS Combo DC fast charge option is included with this car, but there aren't as many CCS charging stations as there are CHAdeMO.  However, the CCS network continues to expand in Georgia, thanks to Georgia Power, EVgo and Greenlots, but that expansion is in-process, thus gaps still exist.

One of those gaps exists on the roads northeast out of Atlanta towards N.C.  Short-range EVs can stop in Gainesville, Ga. to DC fast charge (Carriage Auto Group has two CHAdeMO and one CCS chargers at Nissan and KIA dealers), but past that point there are no Georgia-based DC fast charging stations to the north.

There were two CHAdeMO DC fast charge stations in Clayton, north of Gainesville, courtesy of the EV Project and Blink and a man named Franklin Wilson (more about him, later), but they have been chronically broken for years and finally have been decommissioned until further notice.  We (EV Club of the South) are working on Clayton; stay tuned!
In order to get out of Georgia to the north, I would have to go to Gainesville (45 miles), DC fast charge for about 25 min, then head to Clayton (60 miles), and spend 5 hours charging to get enough range to make it to the DC fast charge station in Cherokee (or the DC fast charge station in Waynesville, N.C.), about 54 miles from Clayton...in the mountains...in the winter...

...or...I could spend a night in the Clayton area, charge overnight, and head north with a full battery in the morning.

This is why I departed Atlanta in the late afternoon.

So, I arrived at the KIA dealership in Gainesville, Ga. around 5:35pm, with 31 miles range remaining @ 36.3% SOC and covered around 45 miles, almost all Interstate.  Not bad.  Ambient temps were in the 60º F range. 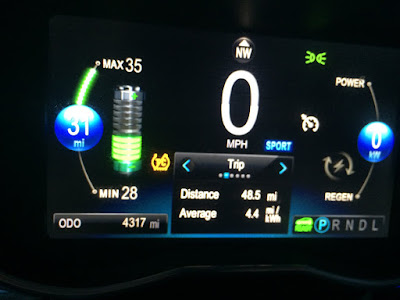 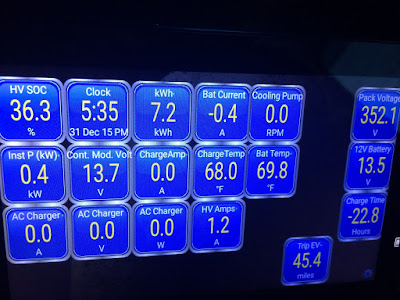 The KIA dealerships have been installing dual-standard DC fast charge stations, even though their Soul EV is CHAdeMO.  Hat tip!  This station is on the Greenlots network, so I plugged-in, and in 25:19 took on 13.8 kWh of energy.... 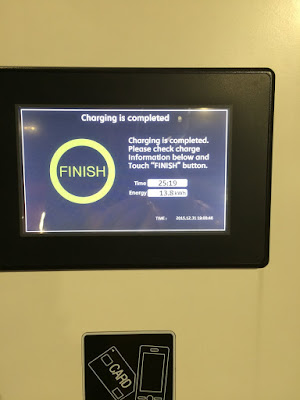 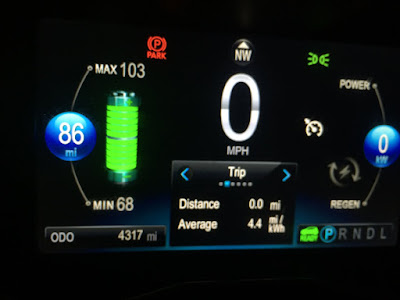 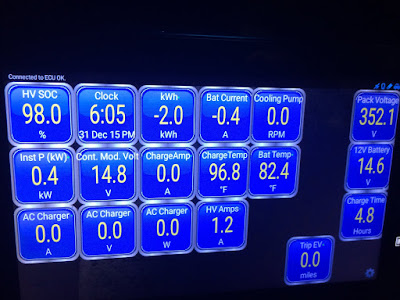 I decided en route to stop in Cornelia, Ga. to have dinner, 30 miles from Gainesville.  There is a Clipper Creek L2 charging station at the Train Depot.  I was taking a chance that it would be occupied, but it was a calculated risk since that charging station is rarely used. 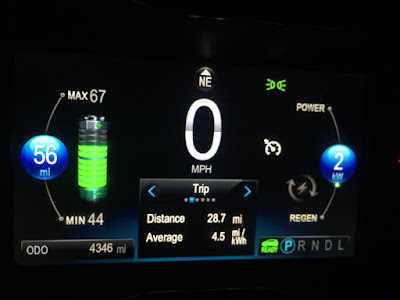 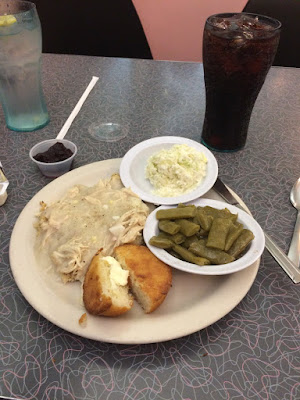 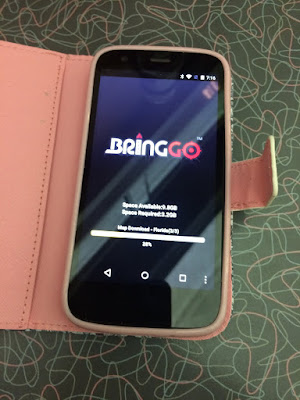 When I left Decatur (home), my Motorola Moto G XT1032 (1st Gen) Android phone indicated that it was time to update BringGo, the navigation app that displays on the Spark EVs 7" in-dash screen via Bluetooth.  It started downloading just as I was about to leave, thus rendering the nav app useless until it was finished.  Lesson learned:  make sure your gadgets are updated and ready-to-go the night before departure!

Sigh.  So, I used my iPhone/Apple Maps to guide me to the first two stops on this route.  Whilst I ate at Fender's, I used their free WiFi to finish the download.  No prob.  By the time dinner was over, it was back online, including 3.2 Gb worth of maps!  Thanks, Fender's!!! 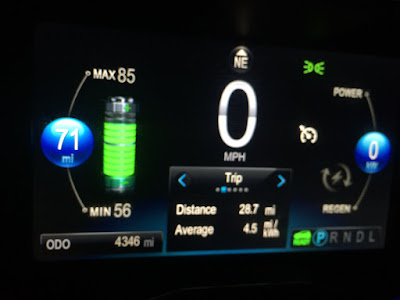 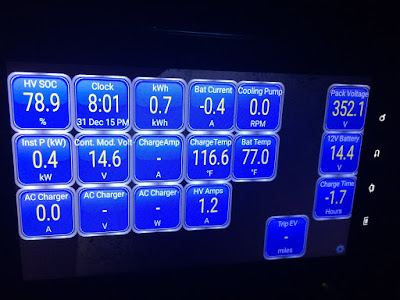 Notice that in 65 minutes of charging, I gained 15 miles of range and 14.8% SOC.  This made the next leg much less stressful, allowing me to bypass the non functioning Clayton L2 charging stations and arrive at my hotel reservation in Dillard with plenty of range remaining.

Arrived at Mountain Valley Inn, Dillard, Ga. (booked via Hotels.com), with 26 miles range remaining...not that I care, because I called ahead and asked if I could charge my EV overnight.  The answer was "yes" after a brief explanation/negotiation with Barry Patel, the owner.  $5 for charging the car.  Some hotels charge a fee, some do not.  $5 is acceptable, as I would only take on about $3 worth of electricity, if that. 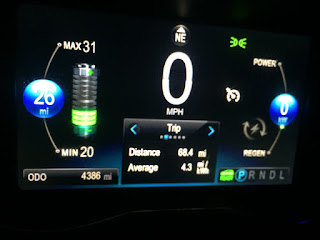 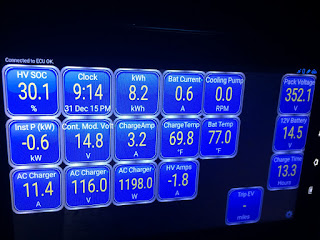 Julie, the night hotel clerk, chatted with me about the car, charging it, how far it could go, the usual litany of questions about EVs :).  She suggested that I could make Waynesville, N.C., with the range my EV has (my plan was to first go to Cherokee, N.C., where a dual-standard DC fast charge stations resides at the Oconaloftee Visitor Center.  Plugshare says there is DC fast charging available in Waynesville, so I thought it over whilst I slept). 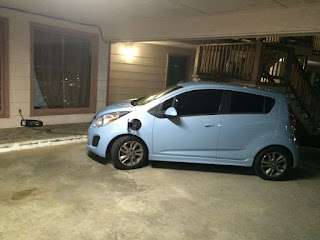 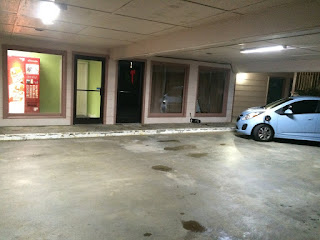 Plugged-in and "opportunity charging" via 120V/15A source, using the GM-supplied EVSE, the car set to draw 12A.  No prob.  My room is two doors down, to the right, ground floor.  Turned out my upstairs neighbors must've been having a dog show/wrestling match, because damn they were noisy.

The WiFi in this hotel was non-functioning during my stay, which sucked because it limited me to a spotty cell signal via T-Mobile (remember, we *are* in the mountains).  I managed, but it was a chore.