This little car...
...totally cries out for a rearview camera.  In fact, to add insult to injury, the Korean version has it, and the Canadian version has it.  Why not the USA version?  Beats me!

So, let's install one.  A couple of the Spark EV fans have done this; their homebrew efforts are commendable!  I made a few valiant attempts at duplicating their efforts, but I kept running into obstacle after obstacle (namely, running the cable from the hatch to the front of the car behind the MyLink unit, and reprogramming the MyLink unit to include the camera).

The discussion in the link above includes a comment from Chris at WAMS, who was linked to a discussion about installing rearview cams in Volts in the GM-Volt webpage.  I contacted Chris quite a while ago enquiring about procuring his services, then that project got back-burnered for nearly two years!

I finally got around to tackling it, and was frustrated at the effort it would have taken for me to DIY.  So, I farmed it out to the professionals.

I sent the MyLink unit to WAMS, located in Michigan.  WAMS reprogrammed the MyLink unit and it works exactly as it did before I sent it to them...except now it has a new section in "Settings - vehicle settings" for the "rear camera option":

Below:  the "vehicle settings" screen... 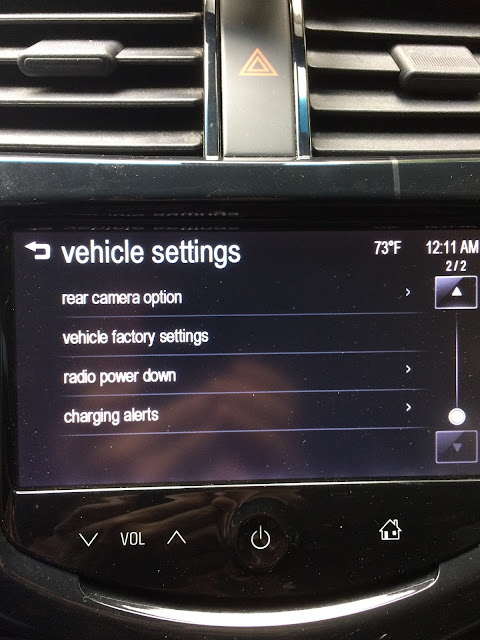 Below:  the "rear camera option", which is just turning ON/OFF parking guidelines.  My camera already has guidelines, so these are redundant, and they don't turn with the steering wheel, anyway. 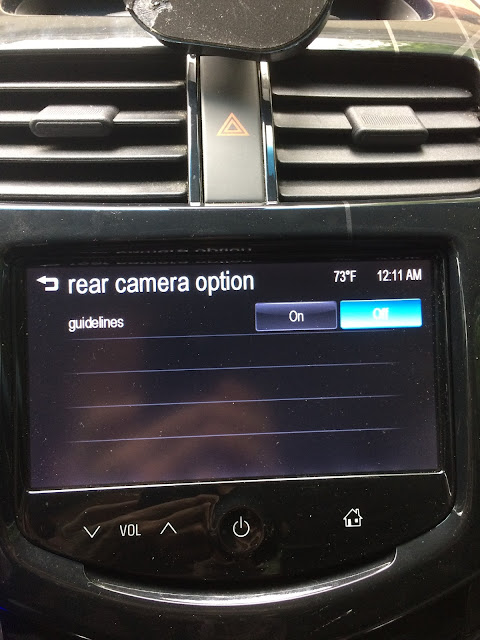 Below:  shift into reverse, and the MyLink unit immediately shows an error screen...because the camera hasn't been connected, yet.  This is A. Good. Sign.  😁 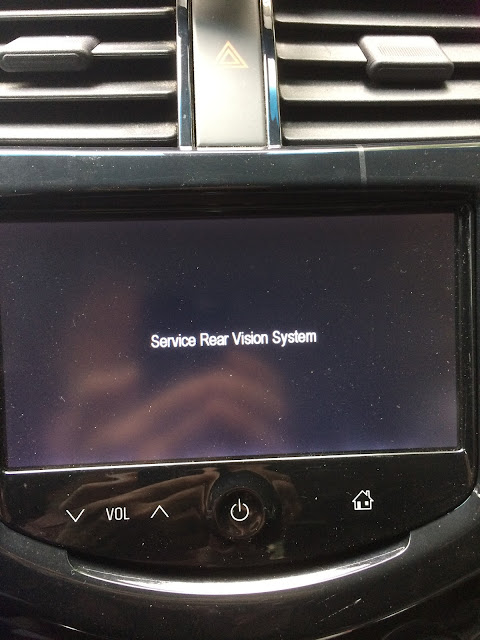 Next step, take the car to Auto Accents in Lawrenceville, Ga.  Many conversations with them about this project got them on the same page as me; Brian and Don worked their magic running the cables from the camera through the hatch, through the rubber boot into the interior and up to the MyLink unit.

This was not cheap, except for the camera.  A quick breakdown:

Am I happy?  Yes!!!!  I got spoiled by having a rearview camera in both Leafs that I leased a couple of years ago.  They were SL models and were well-equipped.  This 2014 Spark EV is the higher (2LT) of the two trim packages and still didn't include a camera...amongst other things.

*Edit 04/20/2018:  The MyLink headunit died a slow, painful death.  Chevy replaced it under warranty.  My fear was that I would have to send the unit to WAMS, again, for reprogramming.  However, my fears were unfounded, as the camera works with the new headunit.  I chatted with the Chevy tech who worked on the car, mentioned that I hoped I wouldn't lose the camera with the new headunit.  He was evasive in his answer as to whether he could save it...and I remember specifically mentioning that I had seen a video detailing the use of the GM software that configures the headunit, and he just mumbled "uh-huh" and rolled his eyes.  Ha!  I don't know if he did anything "unapproved by corporate", but the camera works, so...there!
Posted by RobertK at 6:23 PM