A while back, I installed extra interior LED lighting in the front footwells, in the bottom of the B pillars and the hatch.  I tied the footwell lights to the dome lamp circuit via the Body Control Module (BCM); they're on a timer/dimmer and work marvelously.  I tied the B pillar LEDs to the original hatch circuit, which worked just fine until I discovered that the B pillar LEDs only illuminated with the hatch LEDs.  That is to say, the dome/footwell lamps are on a separate circuit so the B pillar lamps don't illuminate when a door is open; they *do* illuminate when the hatch is opened.

I didn't like that, and didn't realize it until after we completed the project.  I thought I had tested it, using a rear door switch, but the car fooled me into thinking I had it wired as desired...i.e., the B pillar lamps would illuminate with the dome/footwell lamps.  No.  And during testing, the hatch was always open, so that circuit was always active.  Bummer.

So, I decided to address that issue.  I ran a wire from the + side of the B pillar circuit on the driver's side forward to the connector for the footwell lights.  Done.  Now, when any door is opened, all interior lights illuminate.

Then I got to thinking:  high-end cars have courtesy lamps at the bottom of the doors that illuminate the ground when the door is opened.  Nice feature.  I had four LEDs from superbrightleds.com: 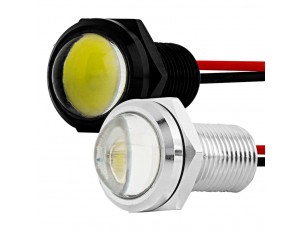 Of course, I didn't know that at the time of installation.  All I knew was that the door switch would activate the interior lighting/door lock switch backlighting, so I thought we were good to go.

I tapped into the circuit for the door lock switches (yellow wire) for 12v and the black wire for ground using wire taps.  Made up a wire harness from an old towing wire harness I found in my junk box.  Tested it a few times.  Seems to work.  My concern was that the circuit would be able to handle the extra load; however, we're talking LEDs, and the draw is so low that theoretically there should be no issue.  Legacy of the Incandescent.


The first test video shows the makeshift circuits I created.  The circuit is on a timer/dimmer.  Seems to work.


I've only done the driver side door so far, but the results look promising.  The downside is that the light is on after dark; it illuminates the footwell and door jamb somewhat.  However, my left arm blocks the light from being a nuisance, and since the install I've forgotten it's even there.

I'll do the passenger side and redo the driver side wiring harness because it is really poorly done, and I've purchased a (rather expensive) crimping tool to make the connections using Molex connectors.
Posted by RobertK at 1:23 PM